You are here: Home / Photoblog / Star Trails Under the Full Moon in Sedona, AZ

Star Trails Over The Mitten & The Foundation 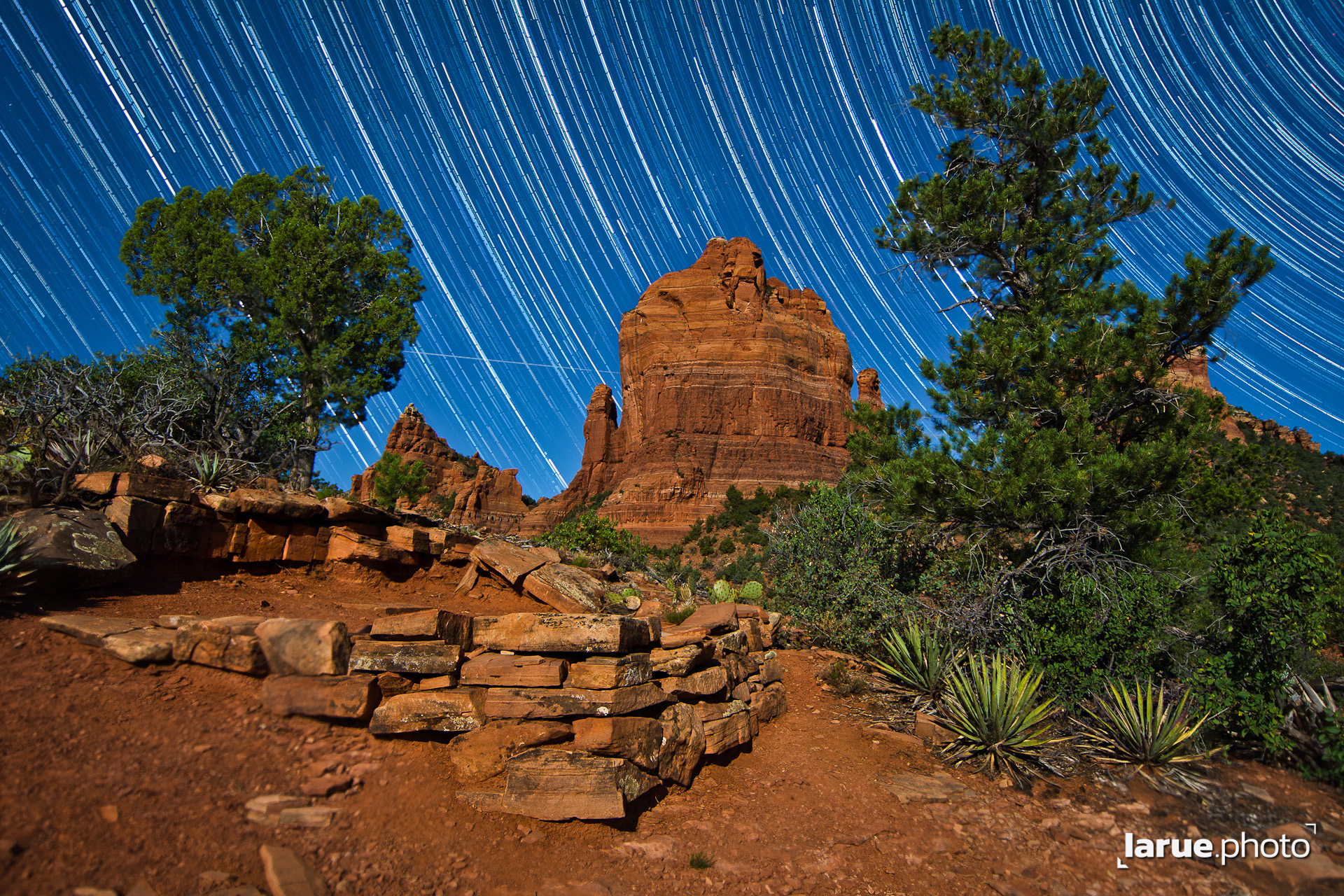 The full moon illuminates the ruined foundations of an old shelter near The Mitten in Sedona as the stars trail overhead.

I love creating astrophotography images for my fine art portfolio, but have rarely shot star trails images in the past. For many years I’ve been pursuing “Project dayStars” where my main goal was to capture images with stars burned in placed as single points of light, while the full moon lit the landscape.

Recently I captured these star trail timelapse sequences from Cibola Pass Trail in Sedona, AZ. My favorite is one I’ve come to call “Stars Trail Over The Mitten & The Foundation”. Not only is it a star trails image, but a focus stack as well. It is composed of 245 different exposures; 243 for the trailing stars, and 2 for the foreground focus stacking. The aperture size I used to capture these images (f/2.8) allows for a lot of light to come in but only a small range of distances to be in focus. So I captured multiple exposures focused at several distances and blended to sharpest areas from each exposure into a single (focus stacked) image.

Creating the star trails in the sky was an easier process. Even easier than ever now that I’m using a piece of software specifically designed for stacking star trail images. My old process for creating star trail images was to use photoshop to open each of the several hundred exposures and stack them all into a single image. Then I would use a script I wrote to change the blend mode of the current layer to “lighten” then select the next layer down and repeat. I copied those instructions 20 or so times over so for a typical star trails layer stack I’d run the script 5 or so times and have a great output file, though it would typically be between 3-4GB.

Loading up all the images at once proved to be too memory intensive for my computer to handle. So instead of doing that process in one shot, I’d need to break it up into increments of no more than 20 or so images at a time. I’d stack 20 layers, change all blend modes to lighten, then merge those 20 into a single images, and repeat, stacking my merged stacks at each new iteration. All said it was a very involved process which saw me waiting at my computer for long periods just to be ready to hit a button and get the computer processing the next step.

With this new software all I need to do is give it the folder of JPGs and it can handle stacking hundreds at a time in just a few minutes! I’m really enjoying using this process and have been able to knock out several star trails images from my backlog.

I captured these images on the Cibola Pass Trail in Sedona, AZ. It was a place I scouted using Google Maps, and Google Earth, so I new what shots I wanted to set up. But as the shoot day approached, the weather forecast showed clouds. I decided to continue with the shoot as planned. The clouds could potentially ruin the shots I was trying to get, by blocking the moons light, and blocking the stars. But if they were thin enough, they could instead become a very interesting element in the video playback timelapse version. So I took a chance on the weather being favorable and headed out to shoot.

I went out for 20 hours the first night; from 2pm-10am, up all night hiking and shooting. And the clouds were there with me the whole time. I was not able to capture the images I had in mind. Here are the best ones from that night. 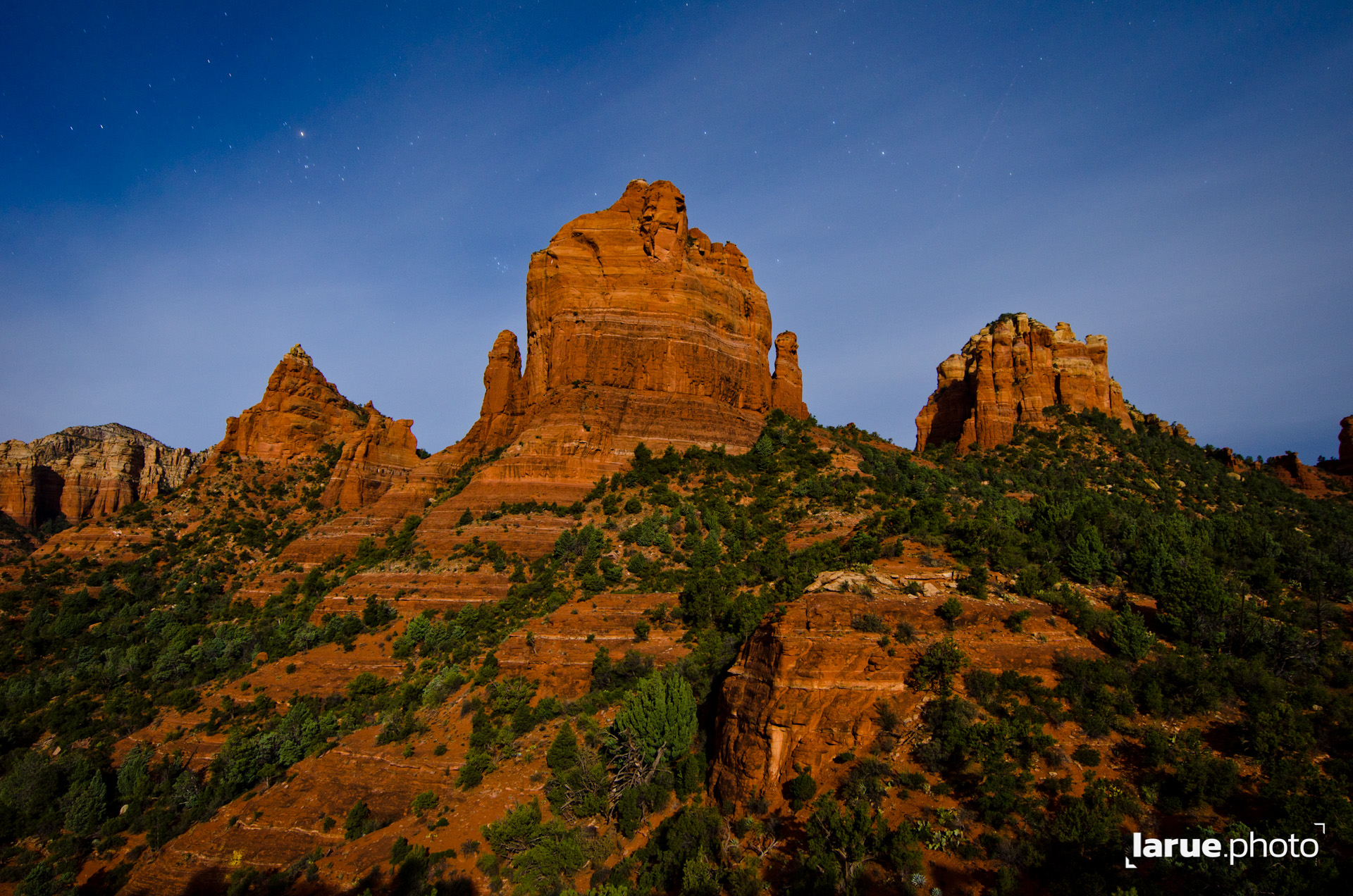 Rock structure in Sedona, AZ called The Mitten, from Cibola Pass Trail. Captured under moonlight with stars burned in place.

So, I went back during the next full moon, and tried again to get those shots. And I’m glad I did! On the return trip I captured the star trails images you see at the top of this page. The weather was favorable. I captured the shots I had pre-visualized, and I knew the area first hand now.

My (9 year old) puppy, Penny, joined me on both shoots to Cibola Pass and she had so much fun! When we hiked back to the car, she kept walking past it, down a new trail we hadn’t explored. I was shocked she had the energy, but it turned out she was lying. She wanted more adventure but didn’t have the energy. She was so tired on the way home that she fell asleep with her head in my lap. And after we got home, she was sluggish for a couple days before she felt rested enough. It took me a few days to feel fully rested too. It was a fun trip for both of us!

Enjoy these snapshots of Penny having fun on the trail during these two adventures. 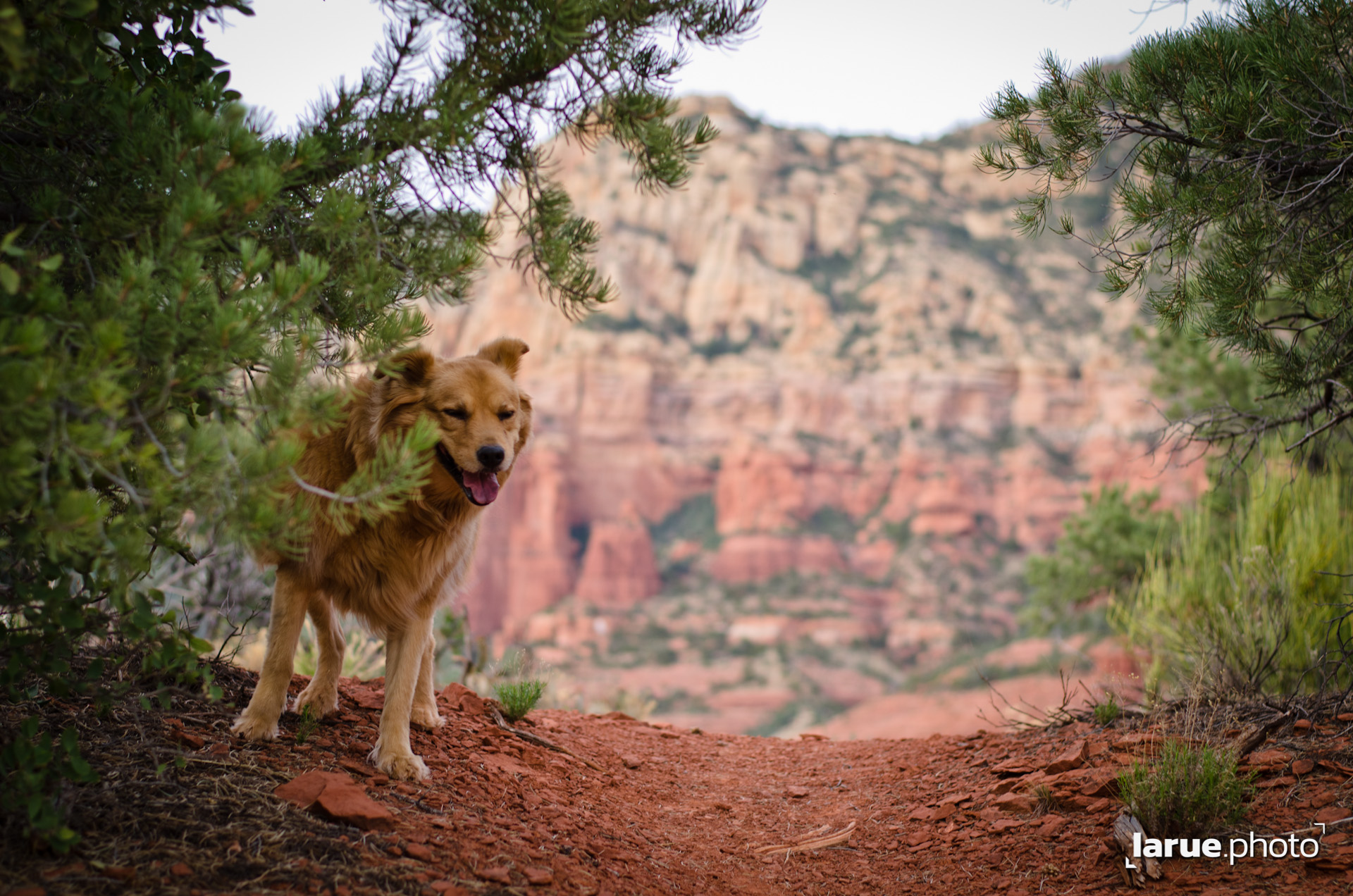 Penny stands to the side of the trail, as if to let someone pass, but we didn't encounter any one during this adventure.